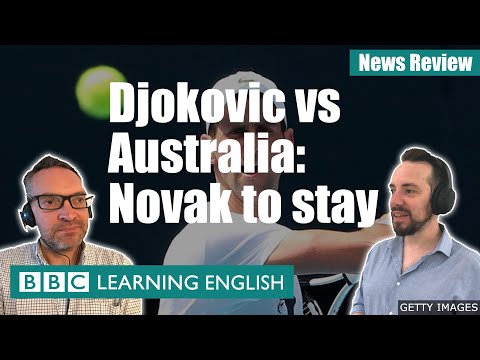 Novak Djokovic has won an appeal against the cancellation of his visa and can now stay in Australia and play in the Australian tennis open.

Djokovic’s visa had been cancelled, but he believed he had permission to enter the country because he had recovered from the Covid last month and was therefore exempt from vaccination rules. The Australian government have said they could still cancel the visa.

Rob and Roy discuss this news story and teach you some related vocabulary so you can talk about it too.

* If the judge quashes his sentence, Mike will be allowed to leave prison after three years.
* The protest against the government was quashed by police.

handed (a) reprieve
given cancellation of a punishment

clearing (a/the) path
allowing something to happen or proceed

* After years of being banned, the politician was told she could stand for election again, clearing the path for her to become president.
* The shareholders cleared the path for a takeover after accepting the businessman’s offer.