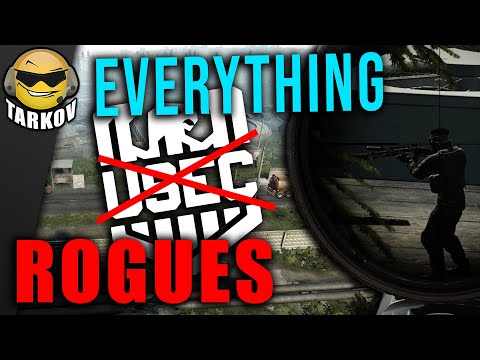 I spent 16+ hours specifically figuring out everything there is to know about the newest faction added to Escape from Tarkov. So today we’re going over everything Rogues. For those who don’t know Rogues are the specific type of mobs that are holding the water treatment plant on Lighthouse. They look and sound like raiders but they’re much different. Because they consider themselves still closely aligned with the actual USEC company anyone who has chosen USEC as a PMC will not be shot on sight. However if you try to enter one of their buildings or get too close to them they will warn you. Generally the warning is a voiceline and a hand gesture but some people say they do warning shots as well. In general this is very difficult to see or comprehend when they warn you so it’s best if you just keep your distance and if you’re going to try to kill them you better hope the gunners aren’t still up.
———————————————————————————–
Become a FORNICATING Member: https://bit.ly/3eQQmMw
JOIN THE DISCORD: https://discord.com/invite/noiceguys
Second Channel: https://bit.ly/3077dnz
LATEST Tarkov News: http://bit.ly/39XY1Yo
EFT Like a PRO: http://bit.ly/2YVPEGs
Support the Channel: https://ko-fi.com/noiceguy
———————————————————————————–
Although I do sometimes get a hand from BSG and occasionally get to talk to Nikita or other members of the team, I do not work for BSG. I also work entirely off public information and past experiences of working in game dev myself, as well as following this game closely for several years. Unless I state very clearly otherwise, the information you’re about to hear should be taken as speculation. You can either get no information or speculation, that’s all we have to go off of these days unfortunately which is why it’s easier to just say Thursday whenever anyone asks for dates. If you want hard facts and dates you won’t get them, period.