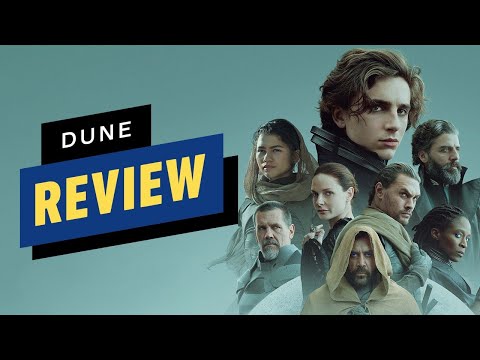 In director Denis Villeneuve’s 2021 movie Dune, Timothée Chalamet stars as Paul Atreides, scion of the powerful House of Atreides in a far-off future where a substance known as the Spice is the most valuable commodity in the known universe. Paul’s father, Duke Leto Atreides (Oscar Isaac), is sent by the Emperor to the desert planet Arrakis to take over production of the Spice. What awaits them on the planet also known as Dune? An uncertain future to be sure, but the Duke has a plan: Harness the power of the desert.

Dune 2021 also stars Zendaya, Jason Momoa, Rebecca Ferguson, Josh Brolin, Stellan Skarsgård, Dave Bautista, Sharon Duncan-Brewster, Charlotte Rampling, and Javier Bardem. The film was written by Villeneuve, Jon Spaihts, and Eric Roth, and is based on the first half of the 1965 novel Dune by Frank Herbert.

Watch our full Dune 2021 movie review and find out if this Warner Bros./Legendary Pictures production is a worthy adaptation of the classic sci-fi story!